– Studio: Grooby
– Cast: Aubrey Kate, Mia Maffia, Megumi, Natalie Mars, Casey Kisses
– Directed by: Radius Dark, Blackula, Terry, Kalin
– Release Date: May 22, 2017
– Info: “5 Scenes from the hottest performers in the world right now as voted for by the judges at the 2017 Transgender Erotica Awards in Los Angeles. See Aubrey Kate, winner of the AVN, Xbiz and now TEA Performer of the year in one of the scenes that got her nominated. Also 2017 TEA Winners Casey Kisses and Natalie Mars show that they’ve got what it takes to be among the top Tgirls worldwide with international winners Megumi from Japan and Mia Maffia from the UK, have super hardcore scenes that sit alongside the best.”
Special Two Disc Edition featuring exclusive TEA Show Footage
– Category: all hardcore, tgirl-on-tgirl, awards

There are no reviews yet.

Only logged in customers who have purchased this product may leave a review. 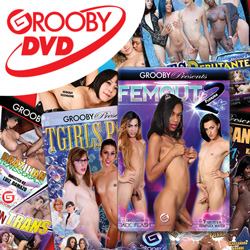 Join us on these networks for updates and plenty of free content!